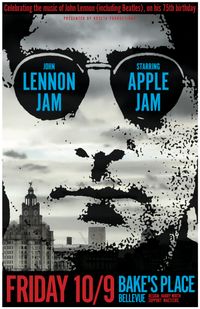 Far beyond a tribute band, Apple Jam delivers unrivaled Beatles-infused musicianship and world-class showmanship, without wigs, costumes or accents. They approach Beatles music with enormous respect and devotion, and deliver jaw-dropping performances that must be experienced to appreciate. Apple Jam has performed to thousands at major venues on the West coast, the United Kingdom, and Finland