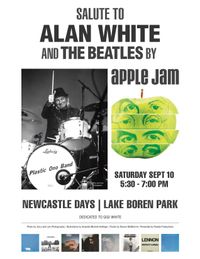 SALUTE TO ALAN WHITE AND THE BEATLES BY APPLE JAM

Alan’s and Apple Jam’s friendship began with Lennon & Harrison tributes at the Crocodile in 2005 & 2006. He generously shared his talents and Beatle memories at 15+ concerts through late 2018, including International Beatle Week 2009 in Liverpool, UK. Also, Alan drummed on Apple Jam’s 2012 studio release of ‘Help Me to Help Myself’, an unfinished Lennon song. https://youtu.be/VY214KJzfHI

Alan White is considered to be one of the greatest rock drummers of all-time. In 1969, he joined the Plastic Ono Band, after John Lennon invited him to play at the Toronto Rock and Roll Revival festival. He notably played drums on the best-selling singles ‘Instant Karma!’ and ‘Imagine', as well as most of Lennon's 1971 ‘Imagine’ album. He also drummed on George Harrison’s 1970 landmark album 'All Things Must Pass', and the hit single 'My Sweet Lord'. In 1972, Alan was recruited to join progressive rock band Yes. He never left Yes and became the longest reigning member appearing on all 43 album releases. In 2017, Alan was inducted into the Rock and Roll Hall of Fame with Yes. Alan’s consummate professionalism and easy-going nature are an inspiration to fellow musicians and fans alike. http://www.alanwhite.net

What: SALUTE TO ALAN WHITE AND THE BEATLES BY APPLE JAM | Showcasing Alan’s many solo Beatles recording collaborations